On Tuesday I had the pleasure of going to New York City with Louis Parks, SecureRF’s CEO, and Mark Javello, a SecureRF advisor. We attended the GE ecomagination award ceremony.

The GE ecomagination Challenge is an open competition for ideas and solutions for energy and the Smart Grid. Almost 4,000 entries from 150 countries were submitted this summer, including one from SecureRF.

Results were announced at Tuesday’s ceremony. GE and their Venture Capital partners will initially invest $55 Million in clean energy solutions, with additional funds to be invested in the next 12-18 months for a total of $200 Million. We were excited to learn that SecureRF is one of 12 companies that will receive a portion of this initial $55 Million investment. GE also gave cash awards to several other companies and announced a new University Challenge to establish centers of excellence that will develop academic programs in critical fields.

Readers of this blog know that SecureRF provides security solutions that address lower-powered computing platforms like RFID tags, but our technology can also be used for embedded devices that will be used throughout the Smart Grid. Our Algebraic Eraser(TM) is a public-key cryptography method designed for resource-constrained devices including meters and sensors. GE’s Digital Energy business can draw on this security technology for the smart grid to help utility customers alleviate consumer privacy and data security concerns.

In addition to the cash, GE has also invested a lot of staff time to this ecomagination Challenge. The competition closed on September 30th so the GE team only had 6 weeks to review over 3,800 submissions and select the winners. As a marketer, I also need to extend kudos to GE’s marketing department for a nice job organizing this event. The announcements were kept under wrap until this week and there was great attention to detail at the ceremony. We are looking forward to working with the GE team.

The official announcements and video of the event are available at:
GE Reports: Revving-Up Start-Ups in a $20 Billion Power Grid Tech Market – http://www.gereports.com/revving-up-start-ups-in-a-20-billion-power-grid-tech-market/
GE and Venture Capital Partners to Invest $55 Million in New Technology as part of the GE ecomagination Challenge – http://www.genewscenter.com/Content/Detail.aspx?ReleaseID=11468&NewsAreaID=2&ClientID=1
GE Ecomagination – http://www.ecomagination.com/

Here are some photos I took: 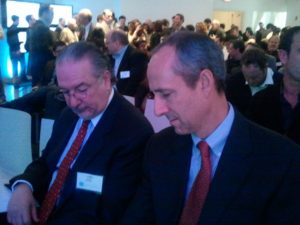 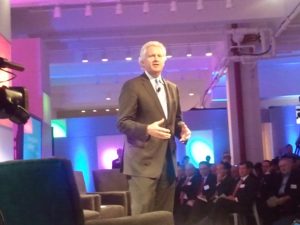 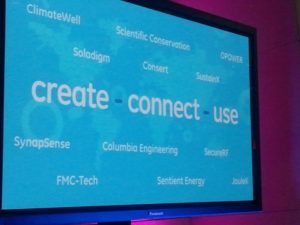