Intel’s DE10-Nano kit, based on a system-on-chip (SoC) field programmable gate array (FPGA), is an ideal development platform for developers who require design flexibility while creating innovative applications for the Internet of Things (IoT). Now, developers using this board, which features a Cyclone V FPGA, can take advantage of SecureRF’s market-ready DE10-Nano Security Toolkit to protect their next application or solution. 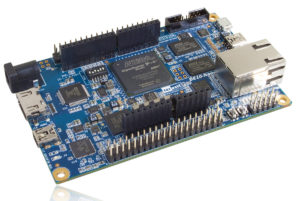 The nearby figure depicts an authentication session between a “home device” (Cyclone V) and a remote “other device”, perhaps an 8-bit sensor. Through a seven-step process, the home device authenticates the other device. 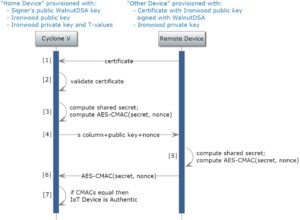 To start working with the DE10-Nano and SecureRF solutions, developers can download SecureRF’s DE10-Nano SD card image, which is available on the Security Toolkit webpage. The image includes SecureRF’s WalnutDSA Digital Signature Verification Algorithm and Ironwood Key Agreement Protocol. The latter enables two endpoints to generate a shared secret over an open channel. WalnutDSA enables one device to generate a document that is verified by another. Both are implemented partially in software on the Intel Cyclone V’s ARM Cortex-A9 and partially in FPGA fabric. The FPGA image is configured to run WalnutDSA together with Ironwood as a demo.

The SD card comes with three separate demos to help demonstrate the operation of the signature algorithm and the key agreement protocol. The first demo showcases the basic operation of both the WalnutDSA engine and the Ironwood KAP from within your computer’s terminal.

The second demo shows Ironwood KAP’s speed in both hardware and software. The demo compares the speed of shared secret calculations running in the Cyclone V’s FPGA fabric versus on the ARM Cortex-A9 HPS. The results show cryptographic calculations running faster in hardware.

The final demo reproduces a real-world application that involves authenticating a remote IoT device via a TCP socket. The DE10-Nano serves as an IoT base station or gateway, while a Java application on the PC emulates low-resource remote device, such as a sensor or actuator.

The SD card image contains the source code for the DE10-Nano side of the third demo, meaning engineers can adapt it for use in their designs. Moreover, on the remote device side, there is the SecureRF IoT Embedded SDK, which implements the same approaches, but in software. There are code libraries for a variety of 8-, 16- and 32-bit microcontrollers. By incorporating this SDK into a remote device, it can both authenticate and be authenticated by a DE10-Nano board.

Contact SecureRF you have questions about authentication and data protection solutions for FPGAs. You can learn more about the DE10-Nano on Intel’s Developer Zone website.