The Internet of Things (IoT) has been appearing in movies for several years now—in some cases, even before there was an IoT. Sometimes, the technology depicted is fanciful, but at other times, Hollywood weaves into its narratives technologies that 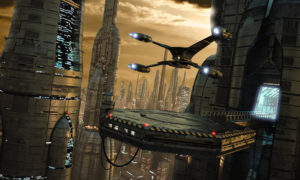 already exist or are looming just over the horizon.

Below, we look at the IoT technologies that appeared in three movies from the past 33 years. How accurate were their portrayals and predictions of the IoT? Read on.

“Make it rain,” says cyberterrorist Cipher (Charlize Theron), and her henchman promptly hacks over a thousand cars, sending some of them careening through Manhattan streets and others crashing through the windows of a five-story parking garage to land on a politician’s motorcade.

The hack makes the cars perform unlikely feats: they shift into drive, they accelerate forward and in reverse, and they turn corners.

Reality check: Hacking vehicles is nothing new, and indeed controlling them remotely has been shown to be possible. As more cars feature self-driving capabilities, the consequences of this type of intrusion could be disastrous. However, all is not lost. Cyberthieves would have to use different types of hacks on different auto makes. Remotely hijacking over a thousand Chevys, Audis, Hondas, BMWs and Fords of different model years would require a lot more work than taking over one car. It’s unlikely that a single hack could give someone control over as many car makes as are shown in the movie.

Moreover, as auto manufacturers learn from past mistakes, they will hopefully become better at hardening the connections between their cars’ control and infotainment systems. Security weaknesses in these connections and the Internet are what allow hackers to break into cars in the first place.

The Sentinel machines, those multi-eyed and multi-tentacled robots that breach Morpheus’s (Laurence Fishburne) ship, are autonomous. But when they travel in swarms, they can sense one another’s presence and coordinate their movements, which suggests they are wirelessly connected and can send and receive complex commands. Such a network would need strong authentication and authorization protocols, since it would be under constant attack by humans trying to send the robots to their doom.

Securing Sentinels in the real (non-Matrixed) world: It’s hard to gauge what computation power a device like a Sentinel might use, but any battery-powered device is necessarily going to be limited in its capabilities. The limitation could be computation power or it could be battery charge life. In either case, it’s likely that the controllers and CPUs in a Sentinel are more powerful than those in, say, a modern industrial controller. Even so, a Sentinel could be considered a “constrained device” when compared with the central computing power of the Matrix.

The Sentinels’ communication would most likely be a secure wireless mesh with tight authentication and authorization using public/private and shared-secret cryptography methods. Each Sentinel would have its own key and use group key protocols to enable detection, addition, and removal of devices from the network. Similar protocols are being researched to secure vehicle-to-vehicle networks that enable cars to communicate their intentions and road conditions with one another to improve traffic flow and prevent accidents.

Skynet begins as a single microprocessor and grows into a global network of servers, robots, satellites, and other computer-based systems. It is intelligent, autonomous, and self-aware. It does not have a central brain; instead, all its reasoning and processing power is distributed among its thousands of systems. And its goal is, of course, to eliminate humans.

Taking Skynet down: Modern developments in artificial intelligence (AI) keep pushing the bounds of what computers and machines can do. Recently, an AI system defeated the world’s top player of Go, considered the most mathematically complex game devised by man. Are these AI systems sentient? No, not yet. Could they become self-aware? Ask 10 people and you’ll get 20 answers. Could humans hack AI networks? All computer systems can be hacked. It’s just a question of having the resources to find and perform the hack, and what the hack gets you once you achieve it. Another issue is that advanced AIs will most likely have written most or all their own code. So, it’s unlikely that humans would be able to easily hack into AIs.

What’s more likely is that AIs would hack into each other. Although they would be running top-notch cryptography to ensure integrity and confidentiality of data and communications, they would find a way to breach each other’s systems.